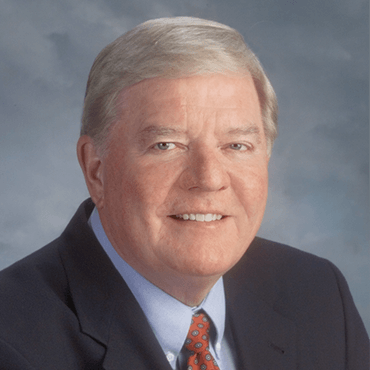 Now enjoying retirement in Sarasota with his wife, Ruth, William E. Getzen was a Williams Parker attorney from 1959–1993, specializing in tax, real estate, and business law. Bill was the first Northerner hired at the firm and the final partner to have his name on the firm’s masthead when, in 1968, it became Williams, Parker, Harrison, Dietz & Getzen.

In the late 1950s, Sarasota enjoyed a real estate boom driven by the arrival of the Arvida Corporation and its development of the former John Ringling holdings on Bird, Lido, and Longboat Keys. Acting as Arvida’s law firm, the four lawyers of Williams Parker—JJ Williams Jr., Davis Parker, Bill Harrison, and George Dietz—needed to hire attorneys to help with their rapidly increasing workload. That meant the addition of 27-year-old William Getzen. Born in Elkhorn, Wisconsin, on May 9, 1932, Bill earned his law degree from the University of Illinois in 1959 and was admitted to the Florida Bar and hired by Williams Parker that same year. He was the first Northerner employed at the firm since its founding in 1925. He joined Williams Parker when it was located on the top floor of the famous Palmer Bank Building, and what is now the Plaza at Five Points.

Bill is the grandson of a Wisconsin farmer. He credits his entrepreneurial spirit to his father Tony, who started the Getzen Musical Instrument Company in the family barn, and his mother Leora, who encouraged young Bill’s roadside vegetable stand. Starting at age 10, Bill bought war bonds from his “summer corn” money, which he used to pay his way through college and law school, as well as to make the down payment on his first home. He played on a Big Ten Championship University of Illinois baseball team and earned highest marks through engineering school and law school. He married his wife Ruth after his first year of law school and her final year of college. In 1955, Bill delayed the remaining two years of law school to fulfill his ROTC obligations. After spending two years at Wright-Patterson Air Force Base in Dayton, Ohio, Captain Getzen resumed his law studies. Bill took courses from two University of Florida law professors who happened to be teaching at the University of Illinois. They liked and admired Bill and urged him to consider relocating to Florida to practice law, a state that was burgeoning with opportunity as it entered another land boom cycle.

With an uncle in Fort Lauderdale and referrals from his Florida-based professors, Bill first interviewed with Holland & Knight before interviewing at Williams Parker in 1959. At a 2012 Argus Foundation event, the late Bill Harrison said of Bill, “I don’t know whether it was our firm or Sarasota itself that outshone [Holland & Knight]. Bill has a very friendly, Big Ten style. He came aboard at a sensitive time…he was a major cog in our growth.” Bill had a quick camaraderie with the other young attorneys at Williams Parker, fellow military veterans Parker, Harrison, and Dietz. Bill’s starting salary was $400 per month.

“Siesta Key was more mosquitoes than people when I was hired,” Bill told an interviewer in 2018. “But we could see the development coming.” Bill’s arrival in 1959 marked the beginning of specialization within the Williams Parker law firm whose attorneys had been generalists to this point. The modernization and diversification of business and development on the southwest coast of Florida meant that more specialization was needed in the legal practice.

Early on at Williams Parker, Bill learned the ethics of the firm as established by JJ Williams Jr., 34 years before. “JJ Williams would say, ‘Birds of a feather flock together.’ That meant that you had to really pay attention to who you took on as clients. If you have a client cutting corners, you will attract more clients cutting corners. Then, according to JJ Williams’ way of saying it, you’d look behind you and there would be a bunch of hogs and chickens.”

In 1963, Bill and the firm moved from the Palmer Bank Building to 1538 State Street, the site of the original Sarasota Chamber of Commerce, which had room for 12 attorneys, where the firm would operate for a decade. The firm next moved in 1973 to its third location at 200 South Orange Avenue. Bill and the other partners took on debt to buy the land and build offices large enough, at the time, for 50 lawyers and their staff.

During his working years, Bill was known for being a natural leader, a meticulous note-taker, and for his consummate business acumen. His knowledge of Florida condominium law was unsurpassed. From working closely with the firm’s founder as a young attorney, fresh out of law school in 1959, until his retirement in 1993, Bill helped guide the firm through periods of sustained and remarkable growth. One of his fondest endeavors at the firm was serving as mentor to a young Mike Hartenstine. Along with Harrison and Dietz, Bill played a principal role in the “momentous” decision in 1978 to hire the firm’s first female attorney, Michele Grimes.

In 1976, Bill and Ruth hosted President Gerald Ford and First Lady Betty Ford at their home for two days while President Ford campaigned in Sarasota. Later that year, Bill and Ruth attended a State Dinner at the White House.

Bill served as commodore of the Field Club and was involved with many other civic and charitable organizations. He helped found the Argus Foundation in 1983, served as its president from 1985–1986, and received the Argus Lifetime Achievement Award in 2012. He served as legal counsel and then as a director of FCCI Insurance Group, one of Sarasota’s “largest homegrown business ventures.”

Bill is well-known for his fun Super Bowl parties and his love of golf and tennis. With very little encouragement, he is also not shy about telling an entertaining story or two!

Having always enjoyed cool mountain air, in the 1980s, Bill and Ruth built a summer home at Wildcat Cliffs Country Club in Highlands, North Carolina. Called upon for his wise counsel, Bill served as president of Wildcat Cliffs and in many other capacities. His leadership led to the development of a tennis pavilion and family picnic grounds, a fitness and pool center, and even a new sewer plant. In gratitude for his years of volunteer service, Wildcat Cliffs named its boardroom in his honor.

Bill’s retirement years haven’t been all work. Golf, croquet, and boating on Lake Glenville are favorite pastimes. He and Ruth have enjoyed traveling the globe with friends and family. From playing golf in Scotland to riding on an elephant in Vietnam, he loves it all.

Bill and Ruth now reside permanently in Sarasota. They very much enjoy the peace and beauty of Ruth’s backyard gardens. They are thankful to have their children, Linda, Sandie, and Jim, and their grandchildren all living in the Sarasota area.

Tenants and Property Managers Beware: You Could be Liable for Your Non-Resident Alien (“NRA”) or Foreign Corporation (“FC”) Landlord’s Tax Bill

How Deep Are Your Pockets?